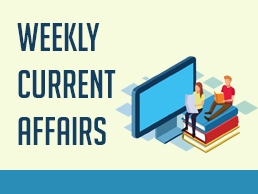 Gujarat ranked the best for water efficiency parameters while Delhi among the worst performing states.

Sania Mirza and Nadiia Kichenok have won the women’s doubles title of the WTA International trophy.

Government of Chhattisgarh has launched Rojgaar Sangi app with the aim of helping skilled and trained candidates find jobs.

Harish Salve has been appointed into Queen Elizabeth IIs counsel of Senior advocate for the courts of England and Wales.


Kaushik Basu  has been appointed as the RBI Deputy Governor

Yashaswini scheme for women entrepreneurship is recently launched  in Goa.

Supreme Court to appoint its retired judge Justice A. M. Sapre as the chairman of its committee on road safety

Elecrama 2020 is being held in  Greater Noida, Uttar Pradesh.

Amazon India has announced that it is to induct 10,000 electric vehicles (EV) into its delivery fleet by 2025.

India's team of Consulates has won the Diplomat Cup Cricket Championship of 2020 held in Sharjah.

Maharashtra govt. has made the Reading of the Preamble of the Constitution mandatory after prayer in all primary and secondary schools of the state

49 children in 5-18 years age group were given the Bal Shakti Puraskar 2020 by President Ram Nath Kovind.

Challa Sreenivasulu Setty has been appointed as the new Managing Director (MD) of the SBI.

Priya Prakash won the Global Citizen Prize: Cisco Youth Leadership Award for 2019. She is the founder and CEO of India-based HealthSetGo

India’s first e-waste clinic will be opened in Bhopal.